Iowa, also known as the Hawkeye State, is 56,272 square miles of breathtaking heartland prairies, rivers, and lakes broken up by a few major cities. It is also a state with a surprising amount of major criminal activity. Seemingly quiet, charming places have unusually high crime rates, such as Council Bluffs, where you have a one in 12 chance of becoming a victim of a crime. These crime rates make bounty hunters — or “Bail Enforcement Agents” as they are referred to in Iowa law — an invaluable part of the Iowa economy, bringing escaped perpetrators back to justice.

Becoming a bounty hunter in Iowa requires licensure and fulfillment of several criteria to establish “sound moral character” and a history of responsible decision-making. The specific criteria and requirements are as follows:

In addition to the above requirements, applicants for a bail enforcement agent’s license must not have:

Additionally, the applicant must: 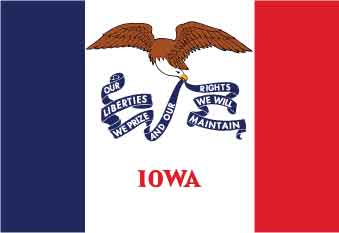 Iowa does not require a degree or specific education program to obtain a license as a bail enforcement agent. However, a degree or some measure of professional training can make you a more effective bail enforcement agent. Degrees in criminal justice, psychology, and sociology can all make you more effective at identifying your subject and determining the best time and date to apprehend them.

Iowa is a mostly rural state, but there are large population centers in the Des Moines and Cedar Rapids metro areas. The next-largest cities are Davenport, Sioux City, Iowa City, Waterloo, and Council Bluffs. Many of the less populous cities in Iowa have an unusually high crime rate, such as the aforementioned Council Bluffs in addition to Keokuk, Clinton, and Fort Dodge.

Bounty hunters in Iowa work with bail bond agencies and law enforcement to identify criminal suspects who have skipped bail. The bounty hunter must then track the suspect and determine a strategy for apprehending them. Bounty hunters must abide by laws applying to citizens; they cannot enter a third party’s home to apprehend a suspect, and they cannot use physical violence or excessive force.

Employment data on the number of bail enforcement agents in Iowa is unavailable because the license registry is not a matter of public record. However, there are an estimated 15,500 bounty hunters in the U.S. as of 2015.

Data on average yearly earnings for a bounty hunter in Iowa is unavailable, but the average bounty hunter in the U.S. handles around 100 to 150 cases per year, making an average annual income from $50,000-$80,000.