The birthplace of Amelia Earhart, Dwight D. Eisenhower, and Buster Keaton, Kansas is a big state with a big heart. Kansas is North America’s geographical heartland; it lies at the dead center of the continent. Kansas has over 72,000 square miles of farmland — 88% of the state — but it also has 2.85 million residents, many of them living in big cities.

Like dust in the wind, Kansas criminals often scatter instead of showing up for their court dates, making it necessary for bounty hunters to track them down through cities and across the prairie. Learn what it takes to become a bounty hunter in Kansas by reading on.

Until recently, Kansas had very lax regulations regarding the practice of bounty hunting, or acting as a “bail enforcement agent.” The original standards were mostly repealed in 1970, but new standards were put in place as of July 2016.

Here are the new standards to become a licensed bail enforcement agent as dictated by Senate Substitute for HOUSE BILL No. 2056:

To obtain a license for bounty hunting in Kansas, the applicant must: 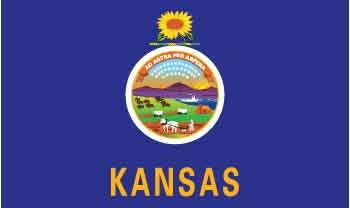 Kansas does not require a degree to become a bounty hunter, but an educational background in criminal justice, sociology, or psychology can help further your career in the justice system. Having an associate’s or bachelor’s degree in these fields can make you more competitive as a bounty hunter while giving you skills that can be applied to even more lucrative careers.

The biggest cities in Kansas are Wichita with 386,552 people, Overland Park with 181,260 people, and Kansas City with 148,483 people. All three cities have a high crime rate, making them opportune locations for bounty hunters. There are also small towns with unusually high per-capita crime rates in Kansas. For instance, Coffeyville, KS has only 9,909 residents but had 90 assaults and 511 robberies in 2014.

Bail enforcement agents operate at the sole discretion of their contracting surety (bail bondsmen). The surety granting work must give the bail enforcement agent a certified copy of the associated bond, a valid, government-issued photo ID of the suspect (mug shot), written proof of contract, and “all other appropriate paperwork identifying the principal and the person to be apprehended.” Police may accompany bounty hunters on jobs. Bounty hunters cannot break the law while apprehending perpetrators, meaning no excessive force and no entering third-party’s homes without permission. The Kansas Attorney General can revoke the bail enforcement agent’s license at any time.

Kansas has many career opportunities for people who wish to have occupations similar to a bail enforcement agent or who want to move onto a similar career. Bail bondsmen are the most closely related in terms of industry, and process servers and private investigators have similar duties to bounty hunters.

Since the new licensure laws have been implemented, only 16 individuals have applied for and successfully obtained a license to work as a bounty hunter in Kansas as of January 25, 2017. These numbers will likely increase as more agents seek and obtain licenses.

There are no income numbers for bounty hunters salaries in Kansas, but a similar occupation, private investigator, makes around $35,379 to $52,951, according to salary.com. The median pay for a PI in Kansas City was $43,788. These numbers are accurate as of January 30, 2017.