Once the forefront of the American frontier, South Dakota has been the home of ranchers, farmers and adventurous workers ever since the Black Hills gold rush of 1874. Long before that, the Dakota territory was the home of the Lakota and Dakota Sioux Indian Tribes, who still maintain a large presence in the state’s extensive Indian reservations.

South Dakota also has the fifth lowest population of any U.S. state, but that does not stop it from having crime. 18,688 crimes were reported in 2014, including 20 murders. Bounty hunters are often needed to help catch criminals after they skip bail, creating a need for bounty hunters in South Dakota to aid the bail bond industry.

To become a bail bond runner, an applicant has to first secure a job with one or more licensed bail bond companies or bail bondsmen. They can then submit an application for a license alongside their proof of appointment. These licenses expire annually in May, requiring re-application every year.

In addition to the above requirements, runners must satisfy the following to be eligible for a license 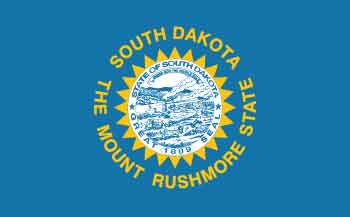 South Dakota’s bail bond runners are vetted by the Division of Insurance, which also manages the licensure and operations of bail bonding agents. Therefore, a bail bond runner may wish to enroll in a program about insurance or finance. They may also want to pursue a degree related to criminal justice, psychology, or sociology to expand their career opportunities in their industry.

While Sioux Falls and Rapid City have the biggest crime rates in the state, some small cities in South Dakota have some relatively big crime numbers, including Chamberlain along I-90 just east of the Missouri River crossing.

Job Duties of a Bounty Hunter in South Dakota

Once approved, bail bond runners have the authority to arrest persons fleeing from their surety after failure to meet their court date. Runners must operate under the authority and supervision of a licensed bail bond agent.

Careers similar to being a bail bond runner in South Dakota include bail bondsman, process server, and private investigator. You can also pursue a career as a security guard, corrections officer, or law enforcement officer.

Data is unavailable for the number of bounty hunters in South Dakota, but there are 60 people employed in the “financial specialists, all other” category on the BLS, which includes bail bonds persons. There are also 1,740 patrol officers, 1,360 correctional officers, and 440 probation officers in the state.

Salary information for bail bond runners in South Dakota is unavailable, but those in the BLS’ “financial specialists, all other” category, which includes bail bonds persons, have a median annual income of $66,740.